Biden To Borrowers: Your Federal Student Loans Are Forgiven. Here’s What To Do Now. 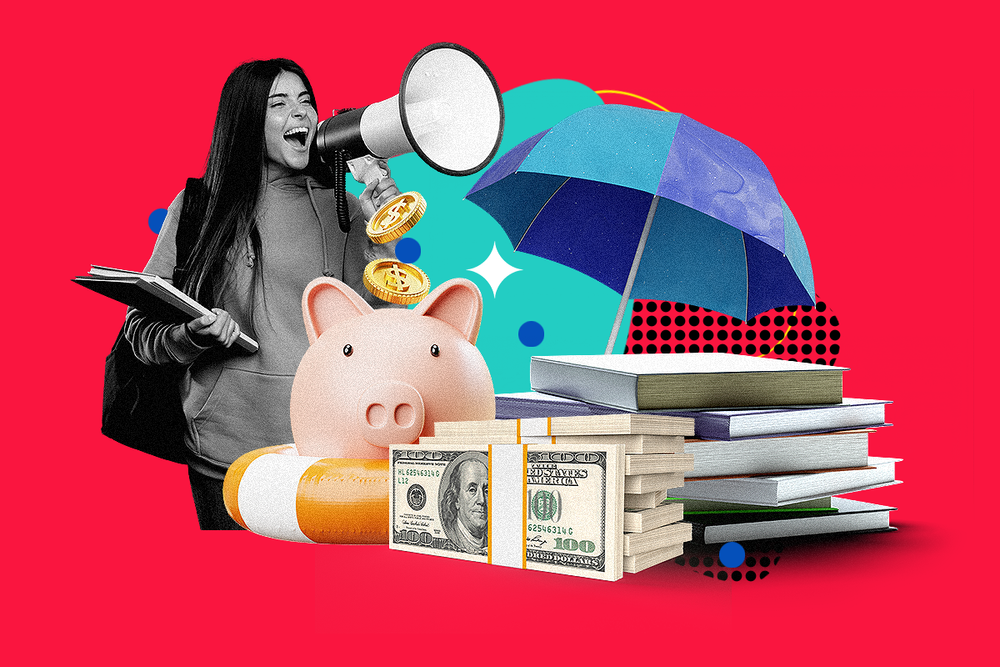 Debtors of past, present, and future could benefit from federal student loan forgiveness, and here's how. 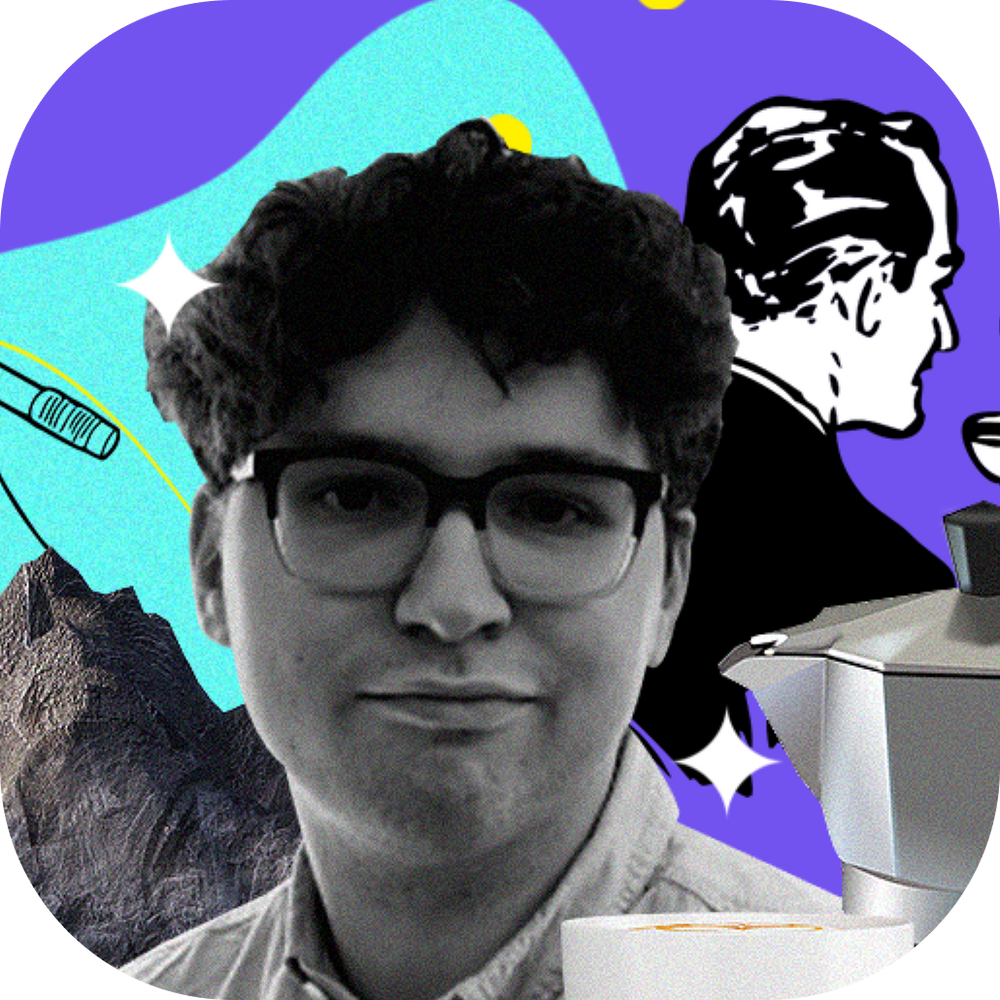 Investing for My Kids

In America, going to college isn’t just an investment in your future—it’s a near assurance that you’ll be going into debt. In 2022, there was more than $1.75 trillion worth of student loan debt—$37,014 per borrower on average. 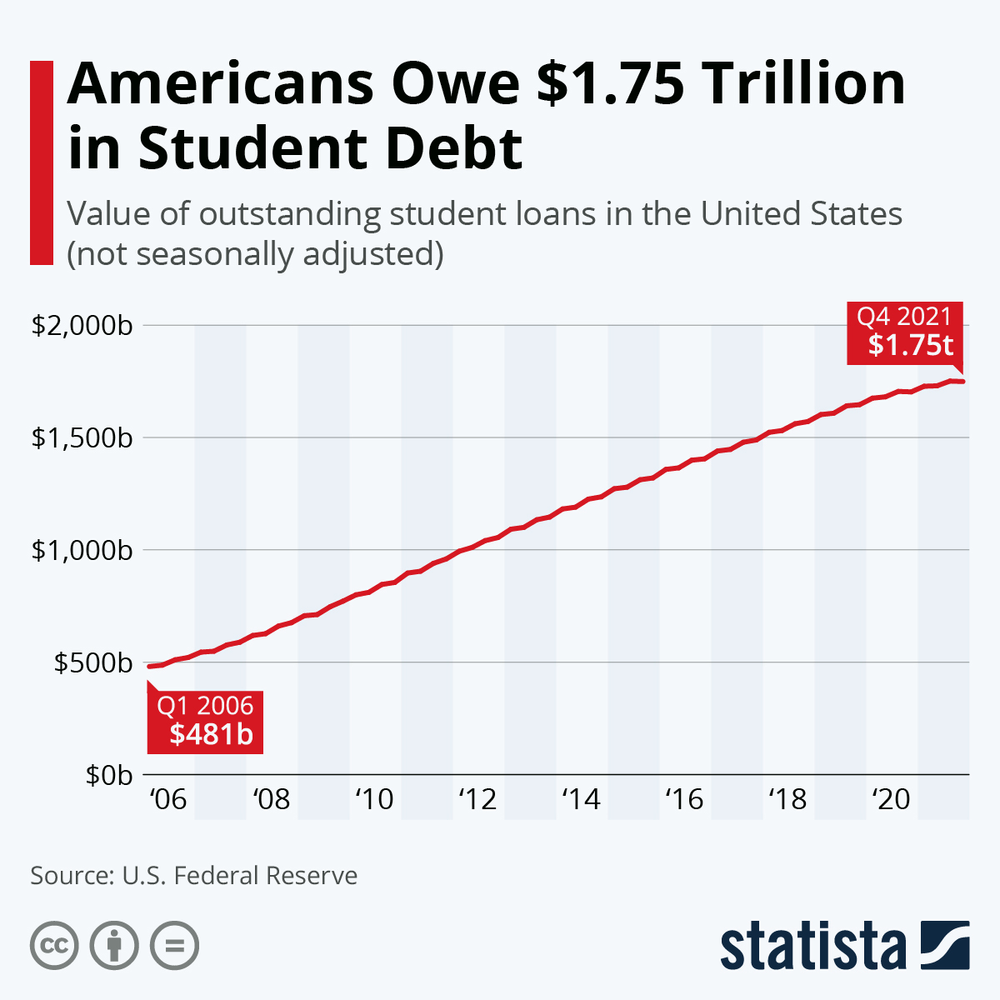 The Biden plan is an opportunity for many middle-income borrowers to invest now and pay debt later.

Student loan debt can be particularly troubling for people looking to save for a rainy day, shoot for early retirement, or just invest in their (financial) future. That’s why Joe Biden’s campaign promise to offer debt relief to many of America’s 45 million student borrowers is a game-changer.

And depending on your situation, what you do next could be even more game-changing. And this is true regardless of whether you’re one of those Americans who will see their balance reduced to zero, still hold some debt after the debt cancellation, or be a future borrower looking to stow away some cash while paying down their debts.

Why student loan forgiveness is an investing opportunity

This guide is tackling all three cases student borrowers might find themselves in—though it'll be somewhat anecdotal, so take this information with a grain of salt before taking action. Still, the hope is that you'll be inspired to make the most of this highly-progressive policy by simultaneously investing in both your financial and professional future.

You’re Debt Free. What Do You Do Now?

By now, you should be gainfully aware if you won the loan forgiveness lottery—that’s $10,000 for most students and $20,000 for Pell Grant recipients, assuming you qualify. 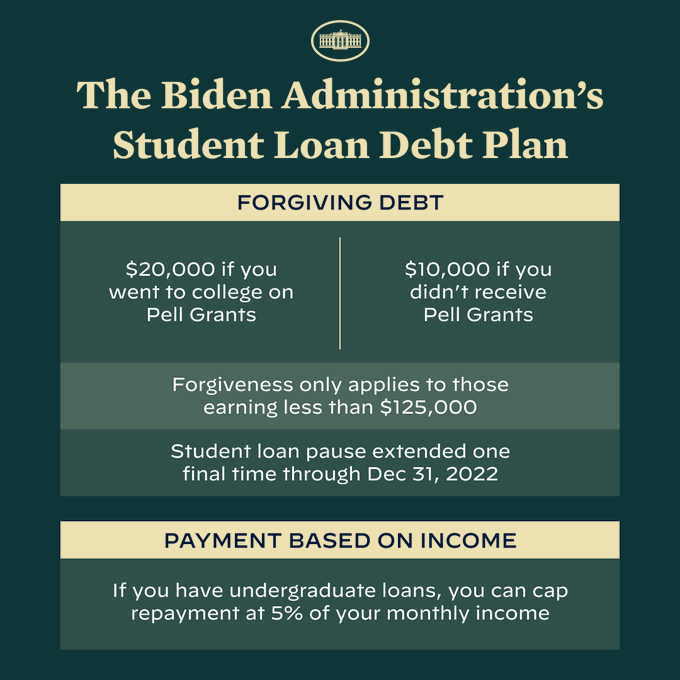 Although you might not feel it yet, you could become $10,000 or $20,000 richer because of this forgiveness. That’s why it might be a good idea to focus on paying down higher interest debt first and saving an emergency fund equal to three to six months of income, especially for middle-income borrowers.

However, if your mortgage, auto, credit card, and other loan balances are in top-notch order, then it’s high time to swap your monthly payments for monthly investments. That’s because this debt cancellation might open up practical opportunities for the formerly debt-saddled to build equity in themselves.

And there’s one huge reason why it pays to invest now rather than look at President Biden and the Department of Education’s new plan as a handout. The biggest reason is compound interest—the magical thing investors with time on their side use. A dollar invested at 20 years old will have more time to accumulate interest than a dollar invested at 50, so the sooner you start, the more value you get. 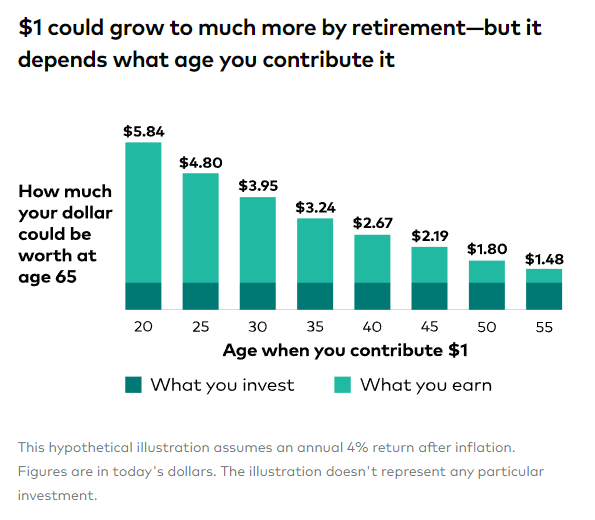 If you’re just diving in, that might seem like a lot of mumbo-jumbo. But, recognizing the value you’re leaving on the table by waiting to invest is critical. That’s why it’s best to put your money to work—and there’s an easy way to do that with a few bucks.

You can open an account at a broker like Public, M1, or Stash and start investing in stocks and exchange-traded funds with just $1. Using these brokerages, you can build a portfolio for long-term appreciation by buying indexes such as the S&P 500—like VOO or SPY—or tech-heavy indices like the Nasdaq-100—through a fund like QQQ.

If you’re feeling spicy, you could also buy stocks or ETFs which pay you to own them—dividends are the best way to say “good riddance” to paying into somebody else’s pocket.

If you’re not scot-free from federal student loan debt, you’re not alone. While some 20 million Americans will be rid of their federal loans because of the loan forgiveness, more than 25 million more will still be nursing some student debt after the debt cancellation. 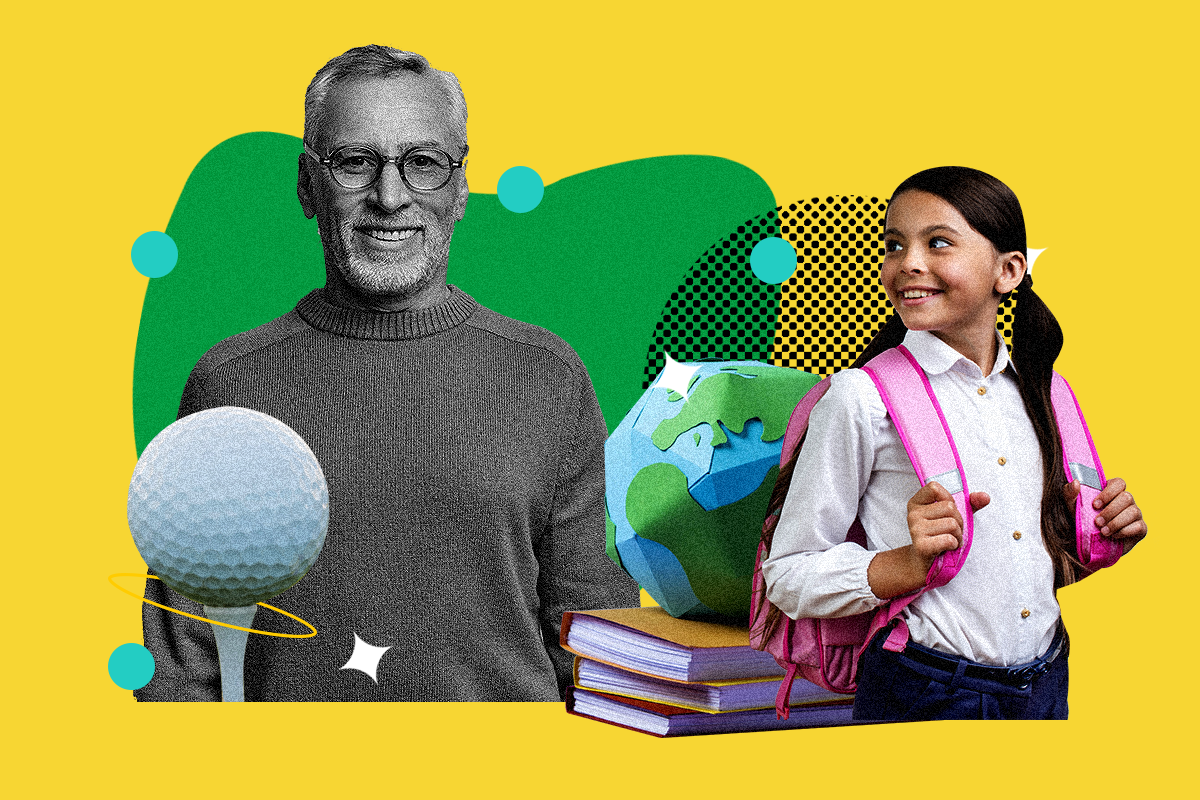 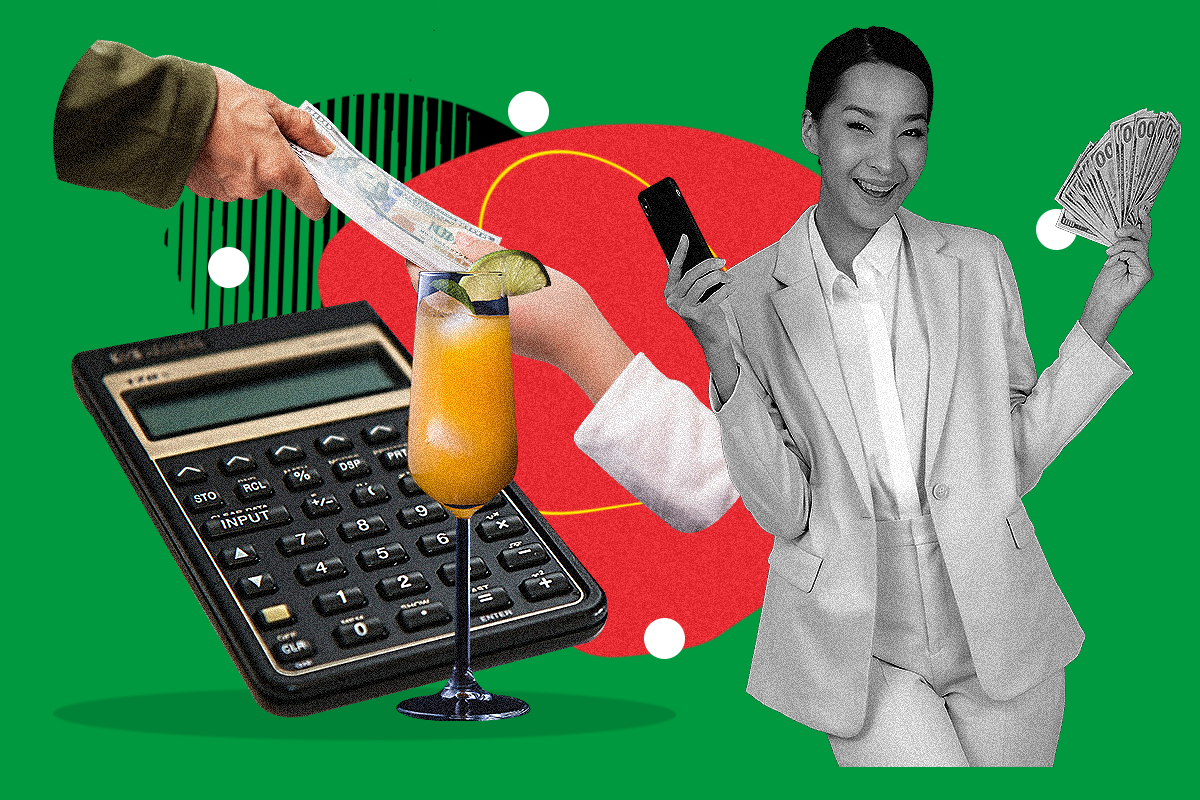 How to Manage Your Money After a Large Salary Increase 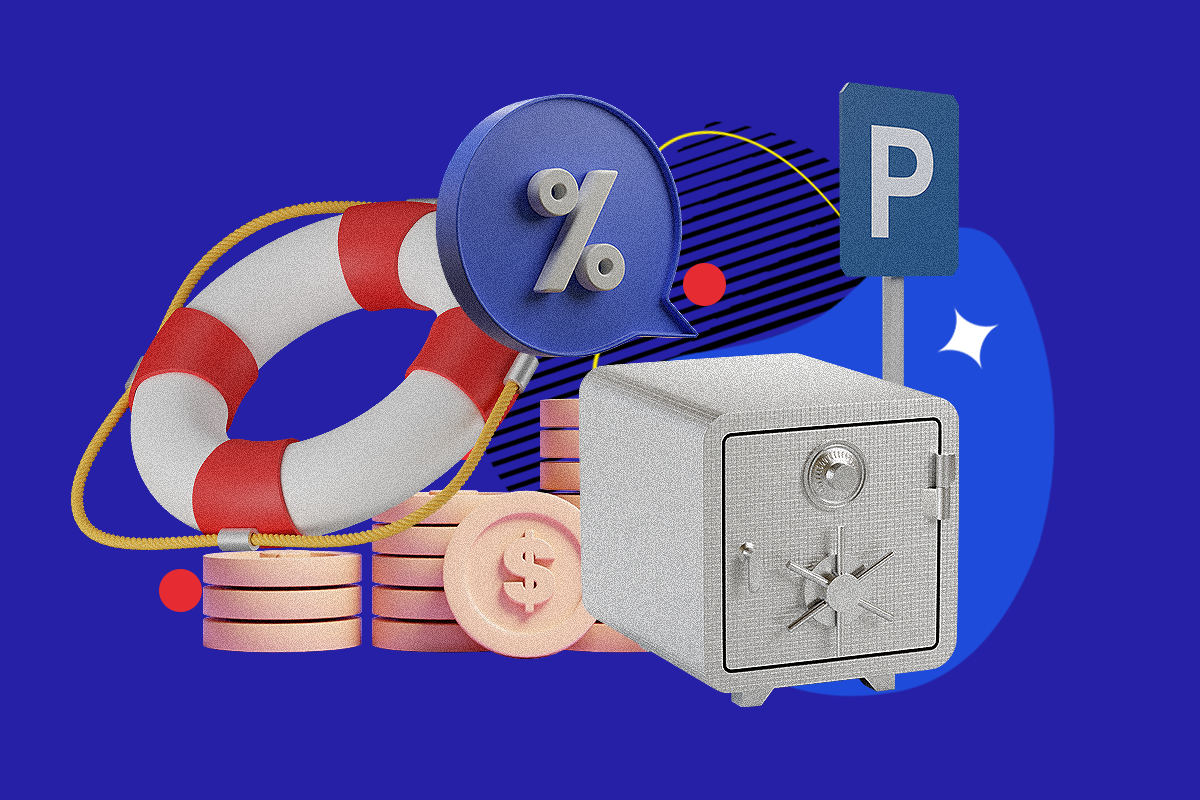 Invest in Debt: Which Bond ETFs Are Best to Invest in 2022?

There could be any number of reasons why: maybe they just have a lot of student debt, or perhaps they don’t qualify for debt forgiveness due to their high income. Both are very real possibilities, especially since one likely begets the other—people with lots of student debt likely have advanced degrees, which probably means they make a higher income.

Nevertheless, there's a possibility that you could still be sitting on undergraduate loans with a balance, even if you did receive some forgiveness. And right now, there’s one big move you can make before you do anything else—take advantage of the student loan pause.

Since March 2020, the federal government has offered forbearance on federal student loans. This means that millions of Americans have been able to avoid making payments on their loans and haven’t had any interest accruing on them.

In spite of this, many Americans have continued to make monthly payments—which will reduce the number of future monthly payments but means they miss an opportunity to invest in the market or pay down higher-interest liabilities.

And maybe, you’re just now realizing that you fucked up by giving the government money when you didn’t have to—that’s why you might be pleased to hear that you can ask for a refund on the loan payments you have made since March 2020 through your loan servicer. You’ll have to make those payments again at a later date, but getting that money back now might allow you to pay off high-interest liabilities like credit card debt or invest by using those refunded payments to build a portfolio.

One easy way to put those refunded federal student loan repayments to work is with a roboadvisor like Betterment or Hedonova. You can link your bank account, transfer funds in, and let them build a diversified portfolio for you. Especially now, with public and private markets revaluing, clawing your money back and investing it into the markets for the long run could be the ultimate version of buying the dip.

Of course, the forbearance will end at the end of 2022. That means that loan balances will begin growing thanks to every borrower’s archenemy: accrued interest. It also means that the pandemic-era break from monthly payments will also come to an end. That makes this move all the more valuable—investing now could allow some student borrowers to go long while their balances aren’t rising.

Naturally, there’s also a possibility that borrowers eyeing their remaining balance could benefit from changes to the forgiveness policy. Let's consider those changes next.

Here’s How to Attack Your Student Loan In the Future.

There’s a catch, though. To reduce your monthly payment under the proposed plan, you’ll have to reduce your taxable income. The easiest way to do that is to contribute to a qualified account such as 401(K) or Individual Retirement Account (IRA) with pretax dollars. Alternatively, you could start a business and 'write off' expenses to reduce your discretionary income.

By doing this and opting into the new Biden plan, you’ll be able to reduce your loan payments by investing in your financial future. In the future, when you're more financially stable, you could convert your 401(K) or IRA to a Roth using a backdoor. However, the real value is that of gaming income-based repayment plan options—and the Biden plan is an opportunity for many middle-income borrowers to invest now and pay debt later.

This unnamed reform plan proposed by the Biden administration will likely be launched by the Education Department next year. It's expected that both present and future borrowers will be able to 'game' this new system.

However, it's worth underscoring that an income-driven repayment plan only works if your discretionary income remains low—that might be hard to pull off if you live in a high cost-of-living region and are contending with inflation (you can invest in particular assets to beat inflation). Your income will need to be recertified annually using relevant income data.

And let it be clear: this isn't advocating for non-repayment. Anybody earning an acceptable amount of money will have to pay back their loan eventually. However, under the proposed new IDR plan, borrowers could have their cake and eat it too. You could pay down your student debt and start investing in your financial future early. Then, as your income rises over time, you could make more aggressive payments or switch to a plan that puts you on a rapid repayment path.