Can NEAR Protocol 10X in the Next Crypto Bull Run? 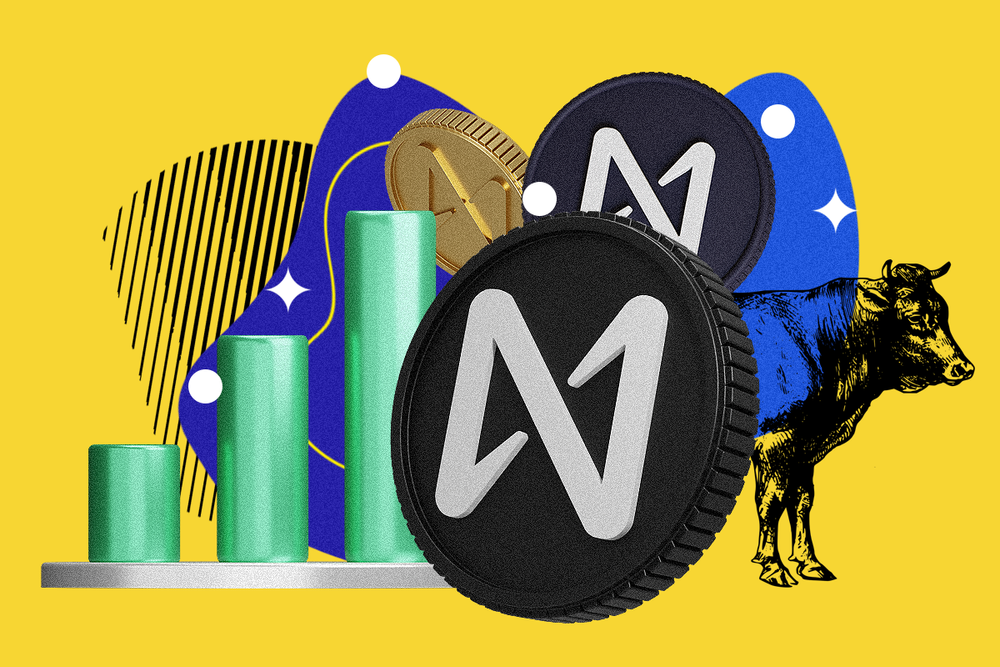 Every Layer-1 altcoin uses scalability as its key selling point. But what about usability, for both developers and end-users? In comes NEAR Protocol.

There have arguably only been two zero-to-one innovations in the crypto space over the past 14 years. The first major innovation was the creation of OG blockchain Bitcoin, a decentralized global store of value worth $1.24 trillion at its peak.

The second game-changer was Ethereum, a decentralized global computer that spawned thousands of applications in sectors ranging from DeFi and NFTs to DAOs and Gaming.

In contrast to Ethereum, NEAR Protocol prioritizes user-friendliness, uses proof-of-stake (PoS) to secure the network, and implements sharding to make transactions fast and low cost.

Unfortunately, both of these massively influential blockchains are plagued by delayed updates, network congestion, and high fees, all of which are signs they weren’t built to scale from day one. NEAR Protocol is a third-generation blockchain that attempts to solve three key challenges to gaining mainstream adoption: usability, scalability, and security. Let’s see how.

What is NEAR Protocol?

Much like Ethereum, NEAR is a smart contract platform (or Layer-1) that developers can use to  build decentralized applications (dApps). But that’s where most of the comparisons end.

In contrast to Ethereum, NEAR Protocol prioritizes user-friendliness, uses proof-of-stake (PoS) to secure the network and implements sharding to make transactions fast and low cost. Not to mention, NEAR is a climate-neutral blockchain. We’ll unpack more specifics on each of these features in the sections below.

The NEAR project was founded by ex-Google engineer Illia Polosukhin and ex-MemSQL (now SingleStore) engineer Alexander Skidanov in 2018. Since then, San Francisco-based NEAR Inc. has grown to 50+ employees with $183.7M in funding from prestigious investors like Jump Capital, Alameda Research and Dragonfly Capital Partners.

Let’s dive into the tokenomics behind this growing ecosystem.

$NEAR is the native token of the NEAR Protocol. Over 1 billion $NEAR tokens were created at the network’s genesis, and distributed as follows. 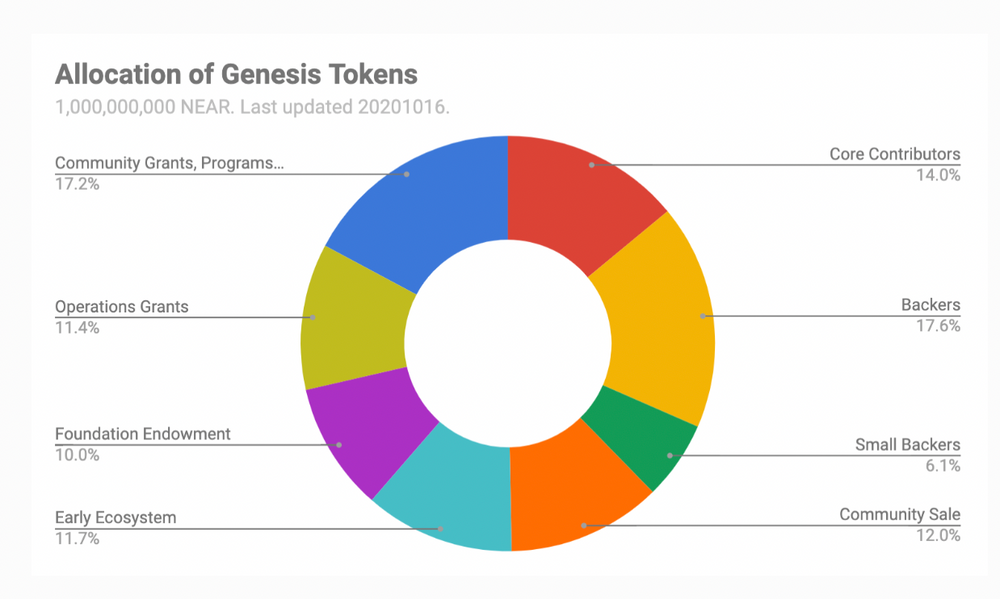 The $NEAR token serves several functions within the ecosystem. For starters, NEAR tokens are issued every epoch (12 hours), and 4.5% of these NEAR rewards go to proof-of-stake (PoS) participants for securing the network.

As is the case with all blockchains, each transaction on the NEAR Protocol incurs a cost, i.e. a gas fee, as shown in the table below.

In the spirit of usability, NEAR’s fees are low and engineered to not fluctuate wildly like Ethereum gas fees do. Plus, the NEAR Protocol distributes 30% of all gas fees to smart contracts for providing services. This native compensation is meant to incentivize developers to build infrastructure on the NEAR blockchain instead of only using it to launch dApps and tokens they can monetize.

Also worth mentioning about NEAR’s tokenomics is that the system burns 70% of all transaction fees. In other words, if the network achieves wide-scale adoption, then the burned fees could exceed the inflation rate and make $NEAR a deflationary token.

Lastly, 0.5% of NEAR’s inflation rewards go to the protocol treasury. Community members, in turn, use their $NEAR to vote on how these resources should be deployed. More on this later.

Is the hype around NEAR legit?

As you can see from the search trends below, interest in NEAR reached a fever pitch back in January. And it’s not difficult to see why.

NEAR Protocol is home to hundreds of communities that are bound together as Guilds—groups with a shared sense of purpose in fields ranging from marketing, art, and music to education, privacy, and trading. 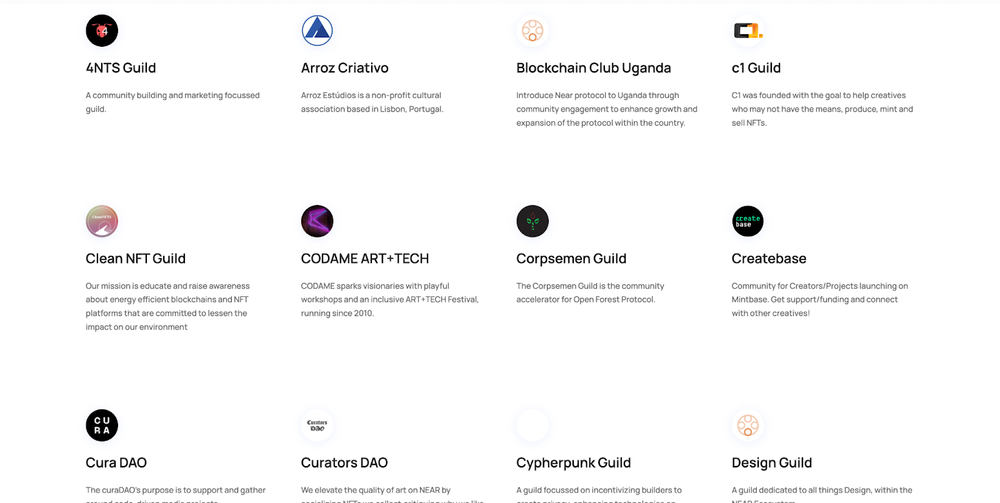 What’s more, the NEAR ecosystem is becoming a true force to be reckoned with when it comes to adoption metrics like total value locked, protocol revenue, total accounts, projects building on NEAR, and both web traffic and Twitter followers.

For context, that's more monthly web visits than Cardano, a top 10 crypto, gets. It's also over half the number of followers Cardano's Twitter account has, and close to Cardano's $10.3M in annualized protocol revenue. Based on all these stats (and not to mention Terra’s recent demise), NEAR Protocol could likely break into crypto’s top 10 list when the next bull cycle comes around.

As mentioned, NEAR Protocol is built on three main pillars: usability, scalability and security. Let’s explore these features and then some.

Usability, for both developers and end-users, is the core tenet of NEAR and influences every other protocol design choice. Cause what’s the point of a scalable and secure blockchain if it’s not even usable in the first place?

Here are a few notable ways in which NEAR Protocol improves upon blockchain usability for both end-users and developers:

In terms of scalability, NEAR Protocol produces a block every 1.2 seconds and can achieve up to 100,000 transactions per second at virtually zero fees. This is all thanks to NEAR’s sharding design called Nightshade, which splits each block into smaller chunks and processes them in parallel.

What’s more, NEAR Protocol is dynamically sharded. This means that the system can scale up or down based on network usage without having to shut down first. NEAR even supports private shards, where enterprises spin up their own mini blockchain with all of NEAR’s security guarantees.

NEAR Protocol is secured using thresholded proof-of-stake (TPoS), where validators need to stake their tokens ($NEAR) to guarantee the validity of transactions. If transactions are found to be inaccurate, the validator’s stake will be “slashed” (i.e. burned). For additional security, NEAR uses 'Hidden Validators' to verify each chunk of a particular shard and 'Fishermen' to report bad behavior.

There’s also a relatively low barrier to entry for becoming a NEAR validator, at least as far as hardware specs are concerned. You'll need 16GB of RAM and 1TB of storage as well as a processor with at least 8 physical cores.

The main obstacle to becoming a NEAR validator node, however, is the “seat price”—the minimum amount of $NEAR that needs to be staked. The current seat price is 199,725 $NEAR ($1.17M as of May 2022). However, as the protocol adds more shards, the per seat price is expected to go down.

NEAR also sets itself apart from most other blockchains (e.g. Bitcoin) by being climate-neutral. To that end, NEAR uses climate solutions provider South Pole to measure its network’s carbon footprint and offset it by planting trees in Colombia, Zimbabwe, and the United States.

To attract more top talent to the ecosystem, NEAR Protocol has the ability to connect to the Ethereum blockchain via its Rainbow Bridge and Aurora. The latter is a Layer-2 solution that allows developers to run Ethereum dApps on NEAR. As of writing this, Aurora has already managed to attract $449.56M in Total Value Locked (TVL).

Governance is currently coordinated by the NEAR Foundation, a non-profit that oversees $800 million+ in ecosystem funding initiatives. In terms of community governance, anyone can submit an improvement proposal on the NEAR forum. Proposals that receive enough support, where one token equals one vote, will be implemented by developers and other members of the NEAR community.

Risks of investing in NEAR Protocol

Like every other Layer-1 altcoin, NEAR Protocol is competing against market leader Ethereum and a host of other projects like Solana (SOL), Cardano (ADA), Polkadot (DOT) and Avalanche (AVAX). Also worth noting is that Ethereum’s planned proof-of-stake upgrades and sharding upgrades could significantly reduce NEAR’s differentiating features.

Another concern with NEAR is its semi-centralization. As the blockchain trilemma predicts, NEAR had to sacrifice some decentralization in order to make their blockchain scalable. At the moment, NEAR can support a maximum of 100 validators per shard. However, as more shards are added to the network, it should progressively become more decentralized.

Aside from validators, the protocol’s governance also relies on the NEAR Foundation to fund projects. Though, the plan is to make the protocol fully community-governed at some point.

Lastly, proof-of-stake (PoS) validators plus delegators risk having their funds slashed due to malicious behavior on the validator’s part. Slashing is limited to 3% of the stake in most cases but it is possible for a validator’s whole stake to be slashed too. As an alternative to staking with one validator, you can use a liquid staking solution like Meta Pool that spreads the risk among many validators.

To recap, NEAR Protocol is a promising project that’s poised to climb up the ranks due to its usability, scalability and community. But the NEAR Protocol isn’t infallible or risk-free by any means, as demonstrated by its inflation, semi-centralization and slashing. Is NEAR worth adding to your portfolio? That’s for you to decide.

Before NEAR was a smart contract platform, it was a regular old Web2 startup in the field of ______ 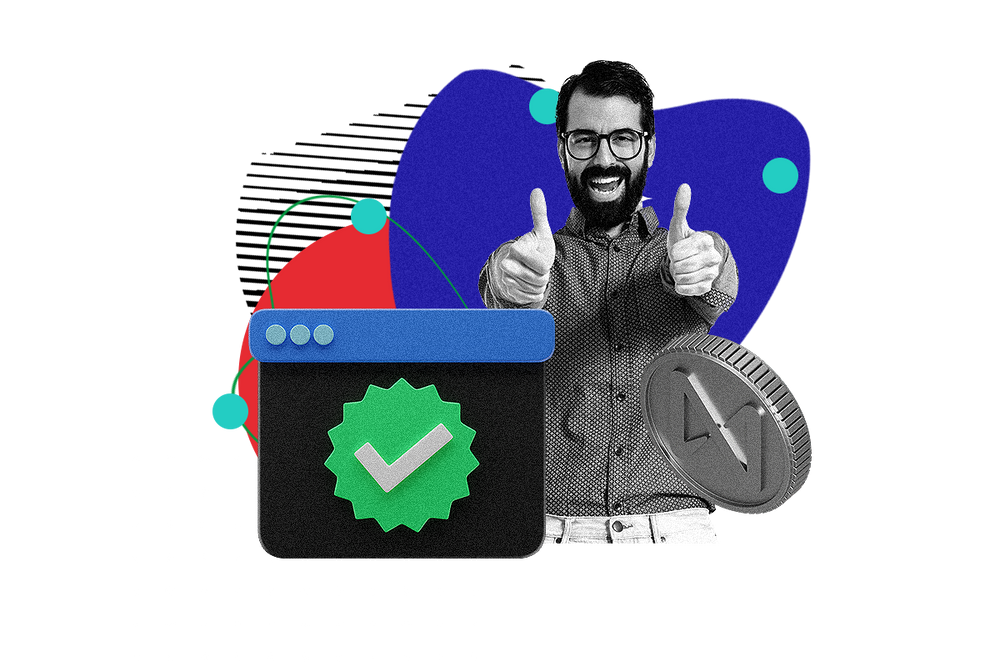