From baseball legends to rising stars, sports memorabilia trades have reached astronomical prices. We gathered the 5 most expensive sports cards in this guide.

Sports memorabilia has been around for thousands of years. You might think it all started with baseball cards in the 1950s, but even kids in ancient Rome used to collect flyers and toys of their favorite gladiators. Over time, these collectibles have become more than memorabilia—many are now valuable investment assets.

"While the roots of sports collectibles are in childhood nostalgia, the last 50 years have shown us that nostalgia can be worth big bucks."

While the roots of sports collectibles are childhood nostalgia, the last 50 years have shown us that nostalgia can be worth big bucks. The returns on collectibles, from Star Wars toys to Pokémon cards, prove that these items are way more than child's play.

Sports cards, in particular, have proven themselves solid investments by bringing positive returns during the last three market crashes. With some collectible sports cards reaching eight figures, we looked at the top 5 most expensive cards ever sold to see what we can learn about the hobby's future.

We'll tell you what sets the most valuable sports cards apart, how you can invest in these collectibles on any budget, and who's featured on the most expensive baseball card ever sold at auction. Let's get into it.

The top 5 most expensive sports cards

The 1952 Topps #311 card has long been considered the most sought-after and valuable baseball card in the hobby. It's been setting records for years. The coveted "Chairman of the Cardboard" has established itself as the most expensive sports card three times in the past five years alone. And who is featured on the most expensive baseball card ever sold at auction? None other than Major League Baseball legend Mickey Mantle.

This #311 Mickey Mantle baseball card last sold in 1991 for $50,000 from the collection of Alan "Mr. Mint" Rosen. The buyer, Anthony Giardano, decided to put the card up for sale through Heritage Auctions after one of his sons told him that soon people would no longer recognize who Mickey Mantle was.

A copy of Alan Rosen's book with a note for Anthony Giardano inside.

Another Mantle #311 set a record in 2018 by selling for $2.88 million before nearly doubling its previous record when the same card sold for $5.2 million in 2021. While Rosen called the 9.5-graded, $12.6 million Mickey Mantle baseball card the "finest known example" of #311, there are three that have earned higher grades from PSA.

We can't predict when, if ever, those 10-graded cards might be up for sale, but in the meantime, you can invest in fractionalized #311 Mantles on platforms like Collectable.

In January 2021, Collectable sold 48,500 shares of an 8-graded Topps 1952 Mickey Mantle for $10 each. Those shares are freely tradable on the Collectable platform for $26.50 at the time of writing. That’s a 165% gain when most traditional assets are in a bear market.

Just weeks before the Chairman of the Cardboard set a record, the Honus Wagner T206 took center field. Again.

In August 2021, a Honus Wagner T206 set the record for the most expensive sports card sold at auction with a final sale price of $6.6 million. And then, in August 2022, the Flying Dutchman returned to break that record with a $7.25 million sale. Not bad for a 111-year-old piece of cardstock.

With only 50 to 200 cards ever distributed, surviving Honus Wagner cards sell for hundreds of thousands of dollars, even with discoloration and damage. The big earners don't have to be in mint condition, either. While fully intact, the card that set the record in 2021 was only rated a 3 out of 10 by the SGC. The 2022 record-smasher was rated a 2.

Front and back of the Stephen Curry rookie card sold for $5.9 million in 2021.

Trading cards aren’t just for fans. Investment funds are now in the game, too. That’s the case with this one-of-one autographed Steph Curry card. The card vault and trading card platform Alt bought a 51% ownership stake in this iconic card and built their second successful fund around it. To be involved in this fund, you need to be an accredited investor.

There are also opportunities to invest in some of Steph Curry's other rookie cards, even if you're not accredited. The 2009 Topps Chrome #101, for instance, is available on Otis (owned by Public) and might be worth it just for a reminder of how young Curry looked at the start of his NBA career.

Shares in the Topps Chrome #101 card cost $10 each, and the card has a market cap of $31,000. You can buy and sell shares on the Otis marketplace, and if the company sells the underlying asset, you get to pocket the returns.

In April 2021, a 2003-04 Upper Deck Exquisite Jersey Patch Parallel autographed card of LeBron James sold for $5.2 million through the PWCC Marketplace to a private buyer from the UK. The sale smashed the record for the most expensive basketball card, which was set in July 2020 by a $1.8 million sale of a LeBron Patch Parallel card.

Of the 21 LeBron Patch Parallel cards on the BGS Population Report, only four were graded a BGS 9. The $5.2 million card is considered the best of those 9s. There are only two cards that rate higher, at 9.5.

One of those BGS 9.5s set the July 2020 record. With a nearly 3x increase in value of the 2021 card, a business development director at PWCC said that if one of the two BGS 8.5s were to come on the market again, it would likely bring $7.5 to $8 million.

JUST IN: Collector Nick Fiorello has purchased this Luka Doncic 1/1 for $4.6 million. pic.twitter.com/BziiWTrdfC

For a few months in early 2021, Luka Doncic held the record for most valuable basketball card, beating out the one-of-a-kind Giannis Antetokounmpo card that sold for over $1.8 million in 2020.

The Doncic card was revealed during a live pack break in May 2019 and later purchased by collector Bolillo Lajan San for over $400,000 (the exact price remains unknown). The $4.6 million private sale to collector Nick Fiorello had been in the works since November 2020, according to San's Instagram post about the transaction. 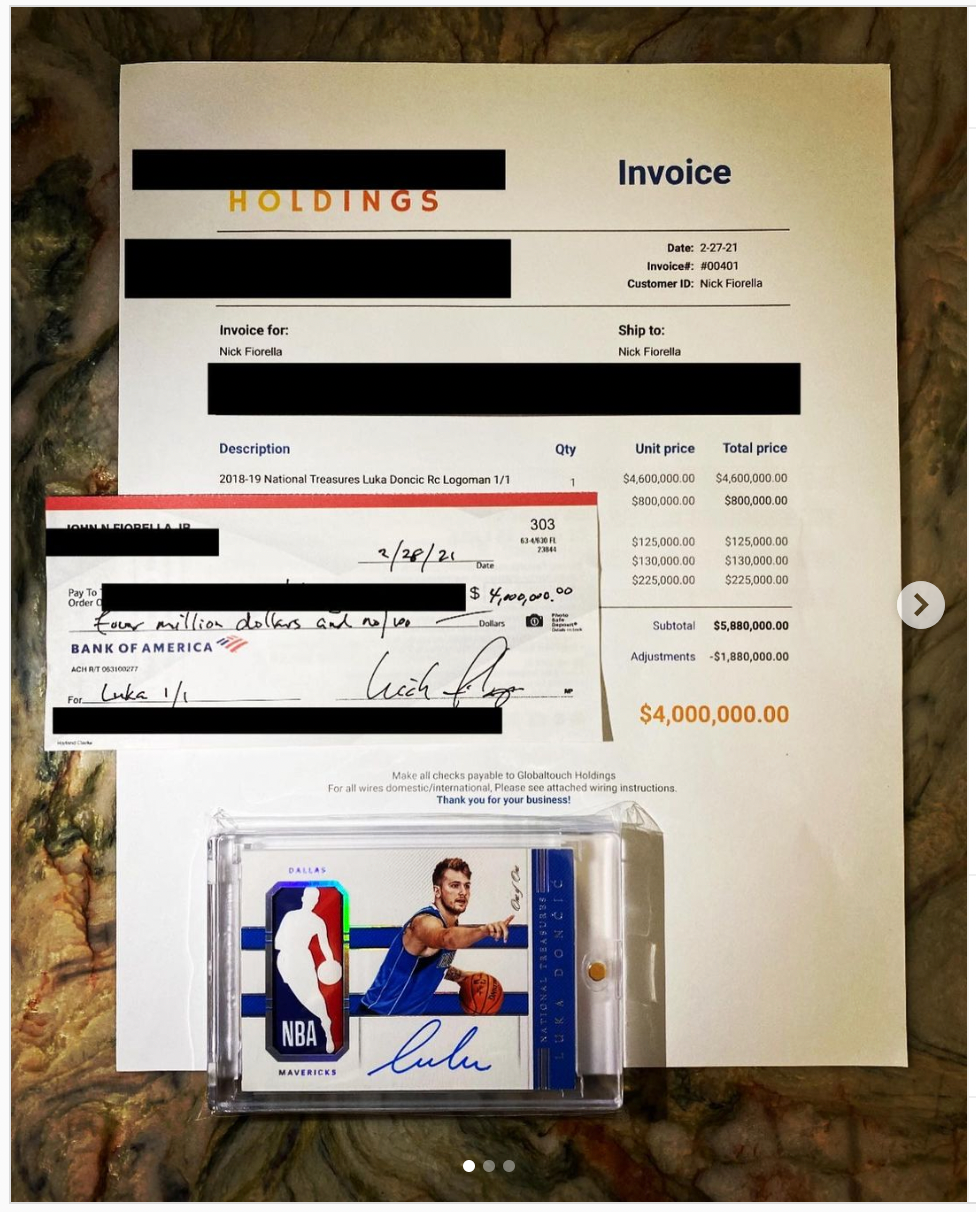 The young Dallas Mavericks star has had other valuable cards attached to his name, too. Just a few weeks before the $4.6 million sale, one of his limited edition 2018 Panini Prizm rookie cards sold through Goldin Auctions for nearly $800,000. And a Dibbs collection of Doncic cards is valued at around $80,500 as of September 2022.

A Luka Doncic collection is available on Dibbs.

With Dibbs, you can purchase Card Tokens, which represent physical sports cards. You can purchase and trade whole tokens or fractions of them. While the physical cards are safely held by a third-party custodian, the tokens exist and can be transferred on multiple blockchain networks. This allows for instant trades, so ownership can transfer while the physical card remains safe.

How much will the most expensive sports card be worth in the future?

While it’s impossible to know what future records cards like these will put up next, it’s unlikely that records will stop breaking any time soon.

The sports memorabilia market is more than just record-breaking sales, though. The lower end of the market isn’t doing nearly as well right now. After one of the biggest booms in sports collectibles history, more common cards are selling off as their prices start decreasing.

So how do you take advantage of the red-hot part of the market if you don’t have millions of dollars to spend? Fractionalization.

One reason the high-end market thrives is that these assets are being purchased and fractionalized. This expands the pool of buyers since the cost burden is spread among thousands of investors.

As funds and fans compete for the few top-notch treasures for sale at any given time, this has kept the high-end sports card market sizzling while enabling everyone to participate.