Beamer, Benz or Bentley: Best Classic Cars to Invest in for 2022 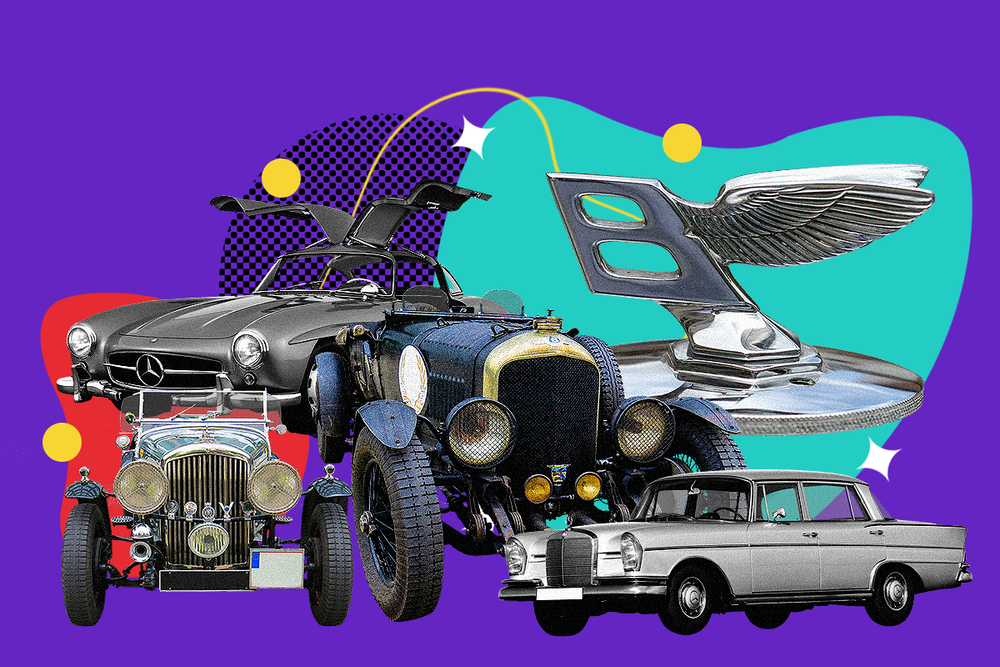 Roads? Where we’re going we don’t need roads. From horseless carriages to a car launched into deep space, these are the best classic cars to invest in.

The smell of faded leather in a vintage car. The powerful roar of a V8 engine. These are the simple pleasures of a gearhead.

If you identify with those delights and want to invest in a classic car, ask yourself: Do you want an antique, vintage, or classic car? Are you looking for a daily driver or a car that’s just nice to look at? How much can you afford to shell out? Five figures? Six?

To help you answer some of these questions, here’s a guide to the best classic cars to invest in throughout history.

Antique cars to invest in

Antique cars (also known as veteran cars or Brass Era cars) are classics that are over 100 years old, manufactured in 1919 or earlier. This was around the time when gasoline cars started to be mass-produced, with models like the 1909 Ford Model T, 1903 Cadillac Model A and 1910 Mercer Raceabout pioneering the way. 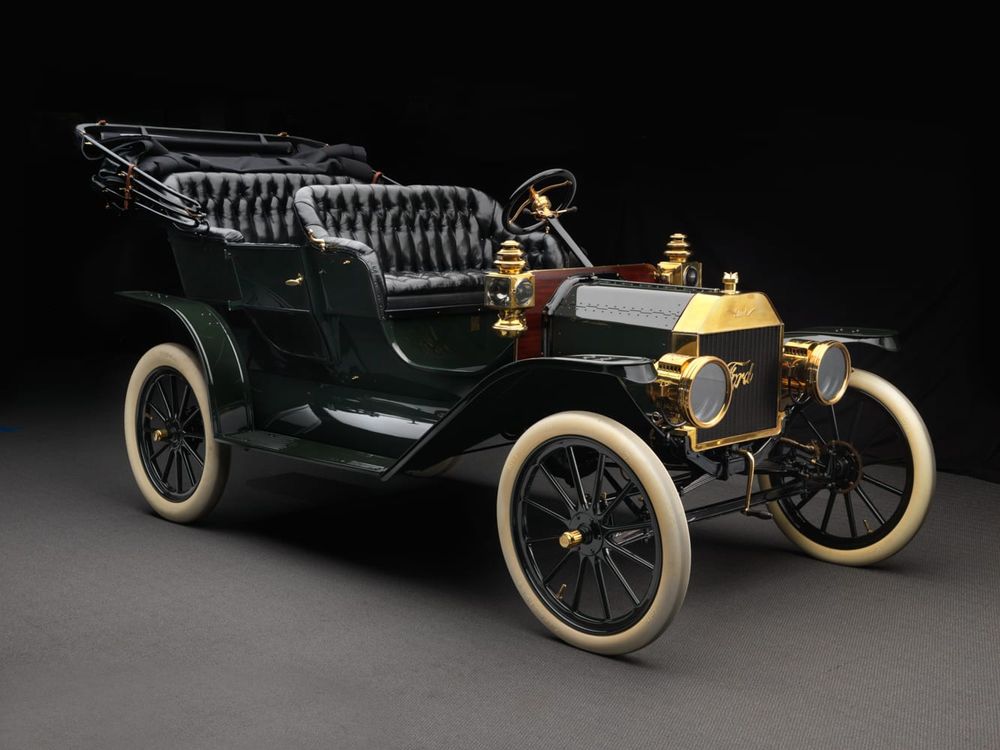 The Ford Model T, in particular, is widely considered to be the most important car of the 20th century. The Tin Lizzie, as it’s sometimes called, was the first affordable car for most Americans (not just the wealthy). With more than 15 million sold, the Ford Model T was the best-selling car in history up to the 70s. This groundbreaking vehicle is surprisingly accessible, too:

Got a need for speed? Well, these oldies weren’t made for today’s roads so you might have a hard time driving them. Nowadays, these relics of a bygone era are better suited to showroom floors where everyone can marvel at their beauty and engineering.

Vintage cars to invest in

Vintage cars are those produced following World War I up to 1975 or so. But since the vintage era spans so many decades, it is typically divided into two sub-eras: pre- and post-World War II. 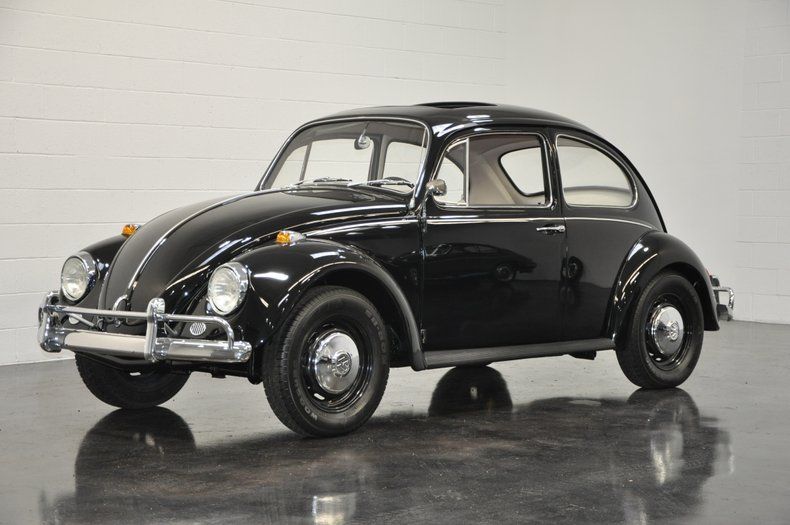 The Volkswagen Beetle is perhaps the most influential car of the vintage era. The Bug, as it’s popularly called, came onto the scene with a unique design and dominated the market for lightweight, cheap, fuel-efficient vehicles from the 1940s up to the 60s.

And with over 21 million produced, the Beetle ultimately dethroned the Ford Model T as the best-selling car of all time. As of 2021, the Toyota Corolla has sold more than double that amount. But this comparison isn’t entirely fair, since the Corolla series has undergone several redesigns while the Beetle always kept it classic — one of the many reasons it’s still in high demand today:

The vintage era was one of many booms and busts, with millions of cars being produced but also many car companies going bankrupt in the process. All in all, this era gave us nationwide road systems, car heating, the in-car radio and four-wheel braking, among other innovations. But the popularity of big fenders, balloon tires and other nostalgic designs was coming to an end.

Modern classics to invest in

There’s a lack of consensus on the exact cutoff year when it comes to modern classics. While most would say that modern classics are typically 20 to 40 years old, some collectible investors also consider 15-year-old cars to be modern classics.

One of the defining features of the modern era is standardization. In an effort to reduce production costs, most modern cars rely on tried-and-true floor plans, steering mechanisms, engine compartments and other components.

In other words, less unique designs—which is what’s fueling the interest in iconic models like the 1982 Porsche 944, the 1989 Lexus LS 400 and the 1996 Jeep Wrangler. The main benefit of investing in these modern classics is that you can actually drive them, unlike (some) pre-war vintage and antique cars. Funny enough, my next pick is not one you’re going to want to drive. 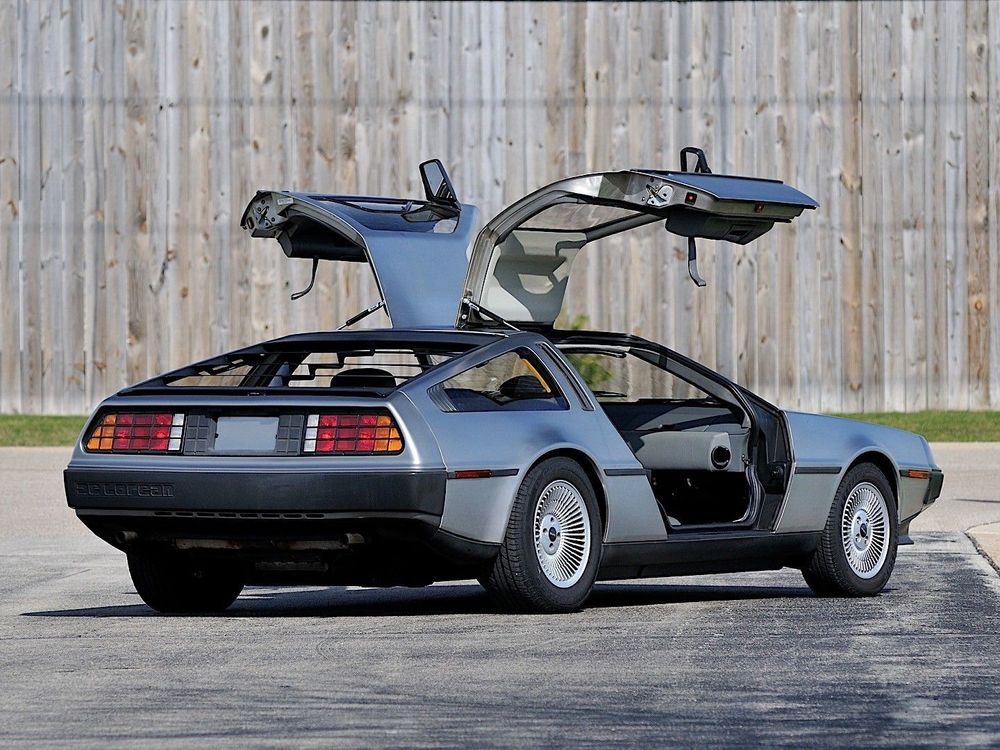 Few modern cars are as iconic as the 1981 DMC DeLorean, with its most distinctive features being the gull-wing doors and stainless-steel body panels. The car itself has terrible build quality, but its sheer popularity comes from being featured as a time machine in the Back to the Future films: 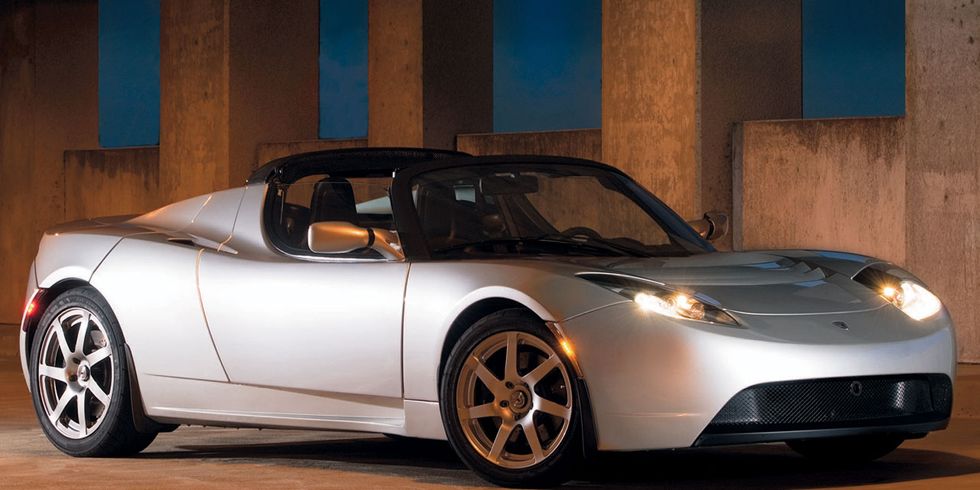 The modern era also saw increasing concerns around vehicle emissions, with road transport accounting for 17% of all greenhouse gases. This need for sustainable transport is what inspired the founding of Tesla. Back in the early 2000s, EVs looked like golf carts, had laughable range and were being ignored by big players like Ford and GM. But then Tesla burst onto the scene with The Roadster, the first electric sports car for everyday use.

At only 14 years old, the Tesla Roadster is not “officially” considered a classic yet. But with it’s legendary status and low production numbers, The Roadster is definitely going to join the ranks of other blue chip classics decades from now:

Getting started with the best classic cars to invest in

Not sure what makes a classic car valuable? Don’t fret, I’ve laid out all the main factors for you in our guide on how to invest in classic cars. But in short, classic cars are valued for their rarity above all else.

Being that they’re rare, you’re not likely to spot them at your local dealership. Back in the day, gearheads had to travel, sometimes thousands of miles, for a chance to bid on classics at auction. But with the rise of eBay and car auction sites, buying cars online has become the norm. This, of course, has it’s pros and cons:

Nowadays, classic car investors do have another option outside of live and online auctions: buying shares in rare, ultra-valuable classic cars—kind of like you'd buy shares in a company on the stock market.

Investing in classic cars? There’s an app for that

Rally RD is an investment app that buys some of the best collectibles to invest in—like classic cars—and turns them into stock shares anyone can buy. The main benefit of investing with a classic car app is the time and cost savings.

Time-wise, you don’t need to source and authenticate these vehicles. And cost-wise, you don’t have to pay for storage, insurance, transport and maintenance costs. Rally doesn’t even charge a fee. In other words, you can gain exposure to the price appreciation of the classic car without the expensive downsides. When you’re ready to exit, just sell your shares on Rally’s secondary market and drive into the sunset. 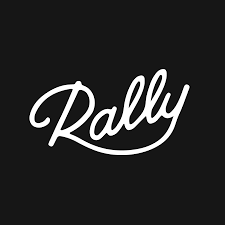 There's a starman waiting in the sky

What is the first production car to be launched into deep space? 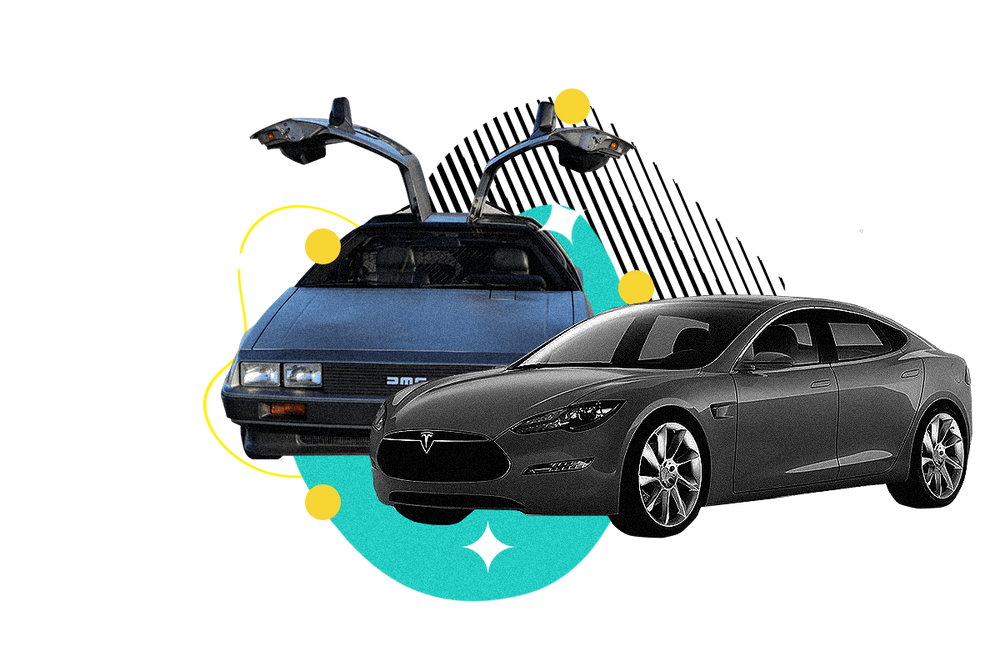 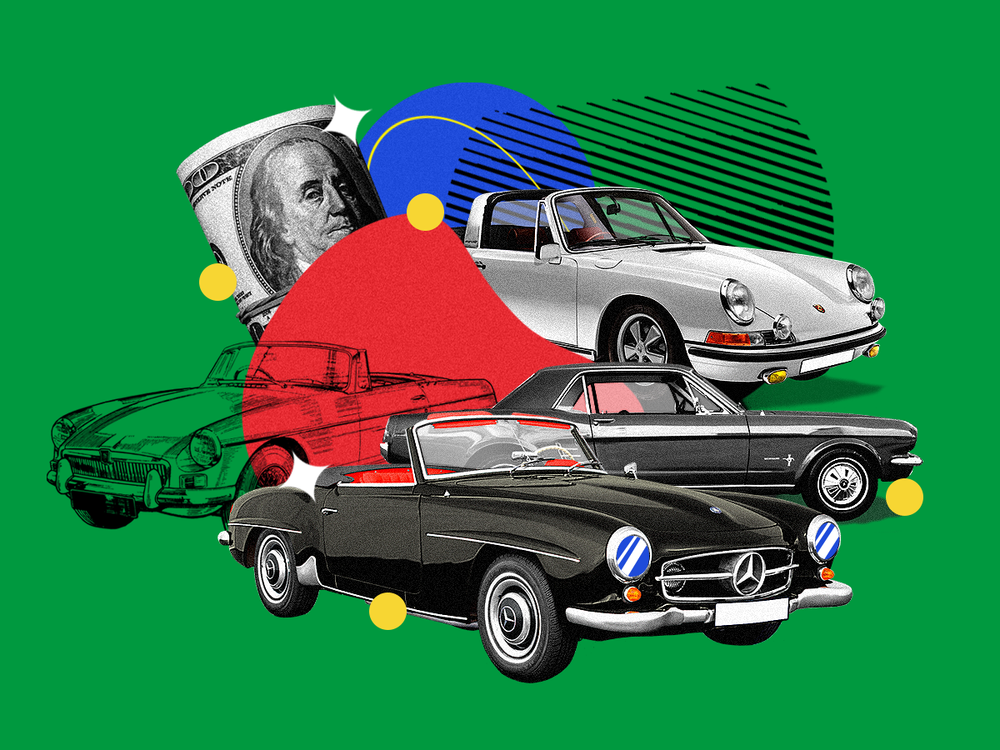 Park Your Money: How to Invest in Classic Cars

If engine revs and exhaust notes sound like music to your ears, then maybe you should monetize your passion by investing in classic cars. 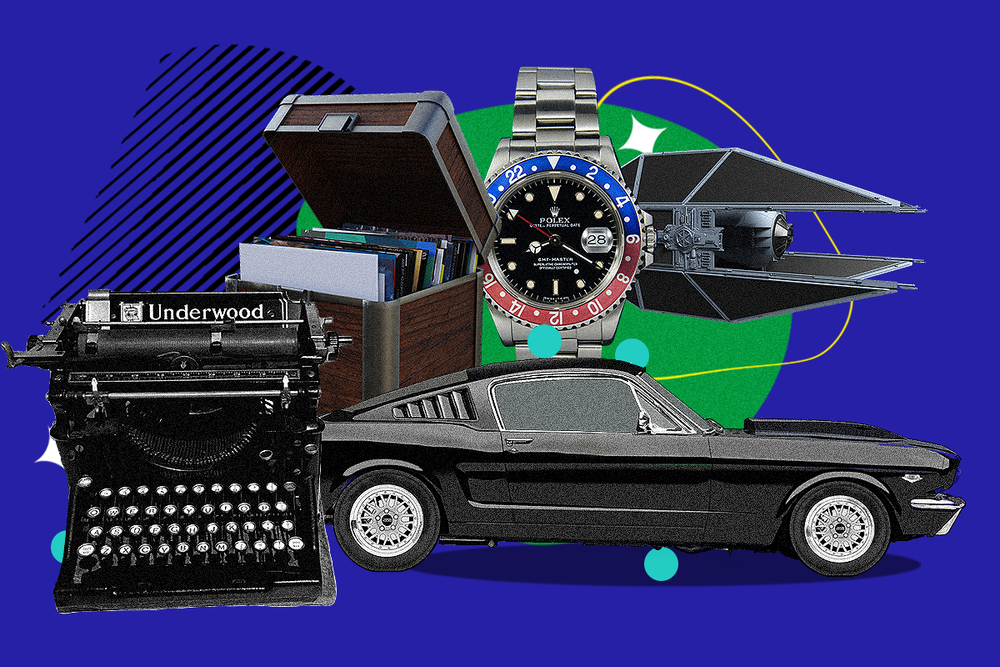 Toys, vinyl records, fine wine, vintage jewelry, and sports memorabilia are collectibles that may offer a good return on investment in the coming years.